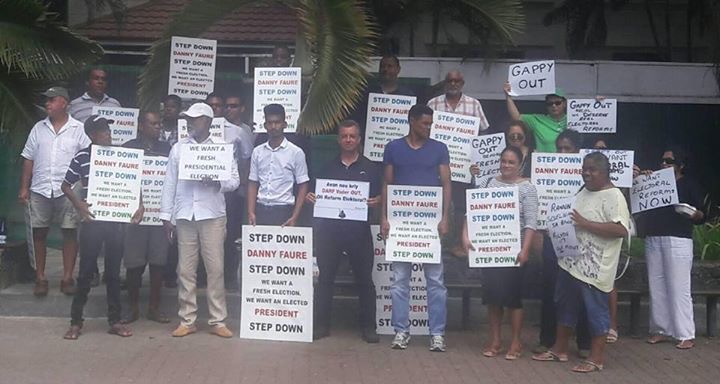 Just when we seemed to be getting somewhere, the opposition groups in Seychelles look like they are returning to form – and heading towards self-destruction.

This tremor comes, interestingly enough one year since the opposition coalition, Linyon Demokratik Seselwa (LDS), broke the ruling party's four-decade grip on power with a stunning victory in the parliamentary elections of September 2016.

The rival opposition groups had finally discovered that by standing together they had made a difference... and Seychelles politics is today in a better position because of that.

However, here we are 12 months on with some politicians openly starting to fight among themselves again.

Divided they will repeat the mistakes of the past and inevitably lose all the gains they have made.

The division in the opposition ranks became very public with a silent demonstration, initially started by one man. Then it grew and has become regular.

A group of around ten Seychellois met on Independence Avenue in Victoria last month to demand new presidential elections.

Among them was Patrick Pillay, Speaker of the National Assembly, who is leader of Lalyans Seselwa.

He said: “I am not asking for the president's departure, I want this to be clear. What I want is the presidential election, and that we have an elected president.”

This followed a declaration by President Danny Faure who had said earlier: “I will not resign and there won’t be any election.”

Faure, who as vice-president succeeded James Michel in 2016, is not due to face a presidential poll until 2020.

To be clear on this, I too have always demanded that Faure hold a presidential election.

But I did so thinking, in fairness, all opposition groups would want that. This in 2017 does not appear to be the case.

Roger Mancienne, Chairman of the Linyon Demokratik Seselwa Council, said: “You have certainly seen a difference of opinion on the subject of calling for new presidential elections right now.

“We all want presidential election. But the party as a whole has set as priority the task of transforming our country through the means that we have – that is the Legislature. I believe we should continue with this as the priority. For the moment, I believe LDS can tolerate this difference of opinion. I am working to bridge the gap.”

Pillay said: “We cannot wait four years for new elections, because this president, whom I like, was not elected but selected by James Michel.”

Predictably, Vincent Meriton, president of Parti Lepep, went the other way. He said: "We support President Faure 100 per cent, and his leadership in the cohabitation we are now in, is working."

Mancienne agrees about the cohabitation: He said: “We are mastering the situation. We are making it work – pushing our agenda but with cooperation from the Executive.”

Pillay sees it differently. He said: “The cohabitation is not working! I have tried to collaborate as best as I can.

“It is a fact that some on the LDS council have expressed concerned on my participation in the protest: 'a dark day in our struggle'; 'disrespect for the Council' are some of the comments that have appeared on social media.

“You know what, even if other politicians do not support my actions I, Ton Pat, stand firmly behind my belief and principles that there should be fresh presidential elections soon if we want to call ourselves a healthy and modern democracy.

Mancienne pointed out: “We still believe that the way Danny Faure came to power was not truly democratic but it was according to the Constitution. We have changed that and there will be no more ‘pas baton’. For me, there is a simple calculation. We cannot remove Danny Faure except with massive popular protests which will be chaos. Since we have the means to advance our agenda, I believe what we are doing is best for the country. It’s true we have set aside the call for new presidential election for the moment but we still want to get there. Right now, we have a chance to prove to the people that we are the best party to govern Seychelles.”

For myself, I endorsed putting pressure on President Faure so he would call for a presidential election sooner rather than he anticipated.

Just remember what President James Michel said before he decided to go: he stressed that he will see his mandate through.

Then he left everything with Danny Faure.

Politics is a dirty and dangerous game as we all know. I’ve seen it time and time again especially in Seychelles.

The LDS has to be careful and play their cards well, otherwise they might see a further split within the ranks and the unity phased out.

A split in the opposition is a desperately wrong thing and at the wrong time. We are stronger at the moment. The way things are going now is positive: the country is moving forward.

Yet to complicate matters, there is a possibility of a new political party in the making.

Step forward, Alain St Ange, the former Minister for Tourism, who seeks redress from the government after his candidacy for the post of General Secretary of the World Tourism Organisation (UNWTO) was brutally withdrawn. He is still so angry, one report has him setting up his own political political group. He has previously supported both the SPPF and the SNP.

So what direction would that take us?

No. It's time for a bigger thought, a bigger change.

I believe that a harmonious and prosperous future for Seychelles can only be achieved through the creation of a Government of National Unity. That way politicians of all persuasions can work together for the benefit of Seychelles.

That is what we, the Seychellois people, want to see happen in our small nation.

I listened with interest to the words of Jacob Terence Madeleine, a National Unity Advocate. He said: “Now is the time to find common ground with our political compatriots and begin healing from the wounds of division.

“Today, I want to indulgently and conscientiously and in an openly, publicly and unequivocally stance declare that I firmly stand as a ‘National Unity Advocate’ of Seychelles.

“In search for better greatness of our country, I stand to promote the virtues of Peace, Love and Reconciliation for the National Unification of my people – the Seychellois.”

That is a good stance to take because unrest like this creates the kind of havoc that Parti Lepep crave. It is just the tonic they need to boost their flagging popularity.

So one year on, we should be celebrating a great stride in Seychelles politics. We should be looking to building a better, fairer future, not going back on past – and lost – disputes and opening up old wounds. We are in 2017 a more mature society. Let's act like one.