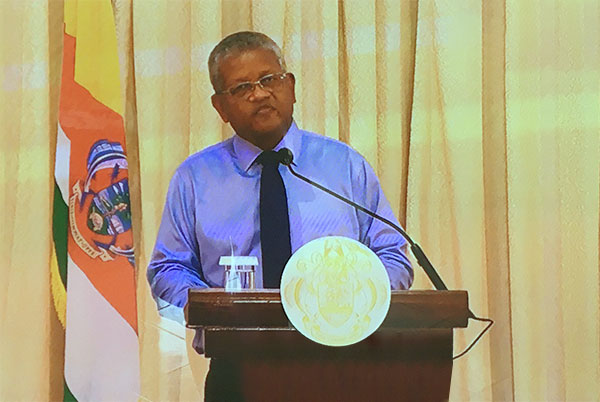 President Ramkalawan: Action in the war on drugs at last

It is always good when people live up to your expectations and so I was very impressed with President Wavel Ramkalawan when he gave his first Press Conference 100 days since taking office.

I am sure that a lot of his supporters will have liked it too as, for almost two and a half hours, he dealt well with a variety of questions, including some about the cost of living and the difficult fight against drugs.

I pray that this good work continues.

Not surprisingly, he was asked him about the term Kales Kase a term he used during the State of the Nation Address.

He replied by saying it is simply a Creole expression describing a difficult situation. It was, he said, a term which had been manipulated with political intent to try to hide the real meaning and purpose behind it.

He went on by giving several examples which were very interesting. These included a debt of R10 million owed to the Seychelles Civil Aviation Authority for the use of the VIP lounge at the Seychelles International Airport, the waste of R129,000 per day on tent rental charges by the department of health and also a cut of R4.4 million per month which was being paid to the Berjaya Beau Vallon Bay Resort as an isolation facility.

He also referred to the fully equipped Anse Royale hospital which was being kept closed, while unnecessary expenses were being made elsewhere.

The President also expressed his concern that some people had accused him of acting as a dictator because he wanted households to fly the national flag. He was not too pleased about this and he defended himself by saying that up till now he has not asked anyone to put up his own portrait anywhere in any offices of the government and institutions.

He also pointed out that no one had been unlawfully arrested and put in jail, as happened before under the Rene regime. This, he promised, will never happen again since he considers himself “a guardian of democracy”.

It was marvellous to hear him make another declaration.

He said: “Freedom of expression is guaranteed as a basic human right, compared to how it all functioned under the previous regime.”

That’s what we fought so hard to achieve… and we got there in the end.

On decision-making, he said that in the past, things had dragged on for too long in implementing simple projects and this had halted many developments in the country.

With foreign labour working in the country, Mr Ramkalawan said that we have to change our mindset and went into details about citizenship.

To me, this is a very complicated issue because there are many foreign workers in Seychelles and no one knows who’s who, and what they are doing. It needs sorting out.

I know that the Covid pandemic has taken its toll on much important social work, but I am unhappy about the situation with the Truth, Reconciliation and National Unity Commission (TRNUC).

This is a subject very close to my heart, as I was case No. 2 and, like many others, I wonder what is happening. The last time I heard about the issue was in March last year and at the TRNUC they told me that everything concerning my case has been sent to the Attorney General Frank Ally.

I understand there are 300 cases to be dealt with and the Commission has only heard from just over 100.

Other people too will be wondering what is going on and how long they will have to wait for some judgment and, hopefully, closure.

In truth, I am committed to taking the long view.

I have waited since February 1980 when I was released from Young Vale prison, so it will not affect my conscience nor my expectations.

I consider myself a calm and cool person, so I will take my turn as there are many other Seychellois families in a similar position.

The war on drugs is another topic that concerns me greatly.

I agree with the President that something needs to be done sooner rather than later because if we are serious and honest with ourselves we can see what drugs are doing to our culture.

They are destroying our way of life and family values are disappearing. For some Seychellois there is literally no tomorrow.

We are talking about more than 6,000 of our children on methadone.

Can we do something urgently so we can get our country moving again?

I see reports that the government has deported a Kenyan woman in connection with drugs trafficking. She was said to be “one of the biggest drug dealers in our country”.

The talk of the town since then is that there have been further arrests and that there will be more.

People are relieved that action is being taken and are saying – with noted emphasis – “at last”.

I too hope this means that the National Drugs Enforcement Agency (NDEA) is moving up a gear and substantial moves are being made to end this evil drugs problem.

And yes, you have to ask why previous administrations did nothing significant for so long.

We will monitor the progress of the NDEA. The future happiness of many families depends on the success of them.

Tourism is another worry.

It is such a major component of our country’s economy that this makes the future of debt-ridden Air Seychelles so important. We await the decision on whether its operations will be restructured now the National Assembly has sent their report to the President.

As for the cost of living, Mr Ramkalwan stated that he intends to transform the Seychelles Trading Company so that all Seychellois will get their essentials goods at a reasonable price.

Also, STC has got a new board which includes businessmen who understand how the system works.

As far as government spying on Seychellois goes, the President condemned the sharing of private information of citizens as it infringes on their rights.

With the (IDC) Islands Development Company, he said a conversation is ongoing and they will have to come up with a model to be adopted. Let’s see how that unfolds.

Mr Ramkalawan revealed something extremely informative about the role of the Press in Seychelles when he said: “I have talked to my Ministers and have informed them that when a journalist has questions we must answer them and tell the truth.”

Good. And about time.

We rarely had that opportunity offered to us when the previous governments had a vice-like grip on the facts.

So, all in all, a very interesting Press conference for the President’s first 100 days.

I am sure that the next Press conference will be even more fascinating and I will do my utmost for Seychelles Life to be present and ask questions on your behalf.

I now know that I have been promised some honest answers.