The writer who helps us rediscover the fascinating past of Seychelles 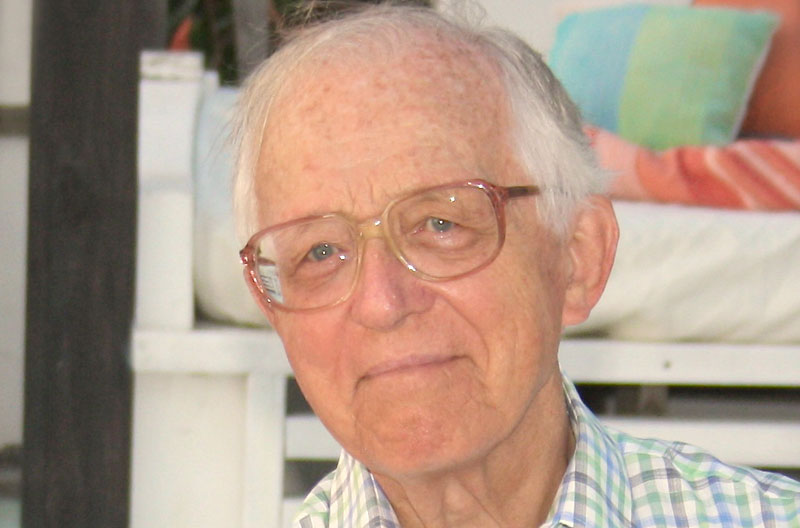 William McAteer is an authority on Seychelles’ history: from the time Seychelles was haunted by pirates and Arab traders to present times.

It is not unusual for someone to quote one of the Scottish-born writer's books, as he is known to be precise, well-researched and flawless. He has a wide global audience too. Many of his articles have been published in Air Seychelles' in-flight magazine “Silhouette”.

In his just-released book “Echoes of Eden”, a collection of historical essays, McAteer once again helps us to rediscover the past. In many ways, it constitutes a political discovery.

Among interesting anecdotes, we learn that Seychelles’ last crocodile was killed in La Digue in 1810. Towards the end of the book, we read the thoughts and reflections of people who have shaped Seychelles’ history. They include Judge Andre Sauzier, historian and conservationist, Kantilal Jivan Shah, Roy Fonseka, a former Commando in the British army and now owner of Pilgrims Security firm; as well as Ramond Brioche, who helped set up the Biodiversity Centre at Barbarons, on Mahe’s west coast.

Born in Glasgow, William McAteer, was called up to do his National Service just as the war with Japan ended in 1945. On the day he reported to camp in the north of Scotland to begin his military service, the Japanese were signing the surrender document on the USS Missouri. He was in the army until 1949, with service in the Middle East and Greece, and went on to become a  journalist in East Africa.

That is where he met his Seychellois wife, Juliette Mellon, whom he married in Nairobi. Soon after, they retired to Seychelles.

She was clearly the love of his life and bore him three lovely children - Ian, Jean and Brigitte. She sadly passed away four years ago aged 81.

McAteer recalls that it was Juliette who suggested he write a history book.

Juliette probably never realised the research and travelling this work entailed and may later have regretted it. McAteer jokes that she was an “island girl”. When they got married, she told him that she disliked the sea and boats. Yet she had lived on Cerf Island, 2k from Mahe, and had to cross the sea often in a small boat.

“Echoes of Eden” is in ten parts. In the first chapter, we are told about the animals that prevailed in Seychelles before humans. These include crocodiles, giant land tortoises and outstanding plants, such as the disappearing “Sandrago” trees, which have been hit by a fungal disease.

Poivre had found the fabulous nuts that the French characteristically called “Coco Fesse”.

The beginning of human history in the archipelago is contained in Chapter two, which also explains the mystery behind the islands’ name.

Sechelles – later anglicised upon the British conquest in the Napoleonic War – was supposedly named after the French Finance Minister, Le Duc Moreau de Sechelles. But McAteer asks: Was it really him or his young and handsome grandson, Marie-Joseph?

There are also tales of pirates. These include William Kidd, one of the most notorious pirates of the Indian Ocean.

Another is the French corsair Olivier Le Vasseur, who is alleged to have buried a fabulous treasure at Bel Ombre before he was caught by French naval ships. He was tried and hanged on Reunion island.

By then, the islands were too valuable to lose. But, they were also costly to defend.

That was the time the first settlements were made on St Anne Island, three miles from Victoria, the capital, in those days, still called “Etablissement du Roi”. For a long time, St Anne was said to be haunted. But that  could have been part of the local folklore. However, it is now the site of the luxury Beachcomber Resort & Spa and no visitor has ever reported seeing any ghosts.

The next part of the history is about the arrival of the first slaves. Seychelles was also used as a dumping ground for emerging rulers from other lands who were an annoyance to their colonial masters.

These include the Sulan of Perak (today part of Malaysia), King Ashanti from West Africa’s Gold Coast (now Ghana) and Archbishop Makarios, who later became first President of Cyprus.

McAteer also writes about the origins of the Seychellois people from many parts of the world, who mixed and constituted a delightful cocktail.

Seychelles joined the British Commonwealth upon independence in June 1976. During World War II, several hundred Seychellois served with the British Army on the side of the Western forces.

Mont Fleuri Cemetery has a cenotaph with a long list of our local heroes who fell in the service of freedom.

McAteer has interviewed some of our war heroes and the book contains interesting stories and testimonies. Today, the memory of their misadventures arouse our interest.

The last chapters contain articles about Curieuse Island, off the coast of Praslin, which at one time was a retreat for patients suffering from leprosy.

We learn more about the Fiennes Esplanade and its connection with the Fiennes Institute for the elderly at Plaisance.

Our islands were a base for American whalers in  mid-1800. “Echoes of Eden” writes about a memorial stone in the cemetery of Rochester in the state of Massachusetts, that record the death of whaling captain Samuel Tripp Bralley in Mahe in 1870.

There are also articles about a number of prominent writers who came to Seychelles during recent times, including Catherine Olsen, the wife of Seychelles’ first President, Sir James Mancham.

“Echoes of Eden” is selling for R450 at Antigone in Victoria and other outlets.