This is the opportunity for the opposition to change history, but the politicians must do it together. We need action, not more words...

Attentive: The delegates at the SNP convention

When the Seychelles National Party held its 22nd Annual Party Convention at the ICCS, there was a good crowd of SNP supporters under the banner of “The Time is Now”.

What a good slogan and yes, I agree, this is indeed the time for action. There may be a surprise  announcement about the presidential and national assembly elections any day and I want to see the political opposition groups geared up to take part. But I want more than just that. I want to see the opposition politicians unite to challenge the Michel administration together. That would make it a real democratic fight.

However, if you look around you just see how disorganised the opposition is. The politicians are going their own way, doing their own thing. And I fear they will miss a unique opportunity to make things better in Seychelles. They need to band together. It is the only way.

The SNP as the main opposition party should be spearheading change. But is it ready? I don't think so. All I hear are words. Words about readiness. Words about taking power. And that is what they are – just words. When is the action to take place?

Just how will he do that? There are up to nine political opposition parties, all dividing the vote, all making it easy for Michel's PL to stay in power unchallenged.

Even though there were expectations that the convention would announce Mr Ramkalawan as the SNP candidate for the next presidential elections, a member of the executive committee said that this would only happen once the elections were announced. 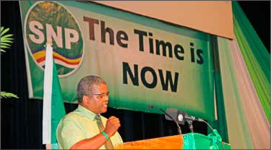 Up against the clock: Wavel Ramkalawan with the SNP slogan

Ramkalawan said: “We believe it is too early to announce our candidates, but in the meantime all our candidates are working in the districts.”

So, no rush there for the SNP.

But he insisted that the party is ready for the upcoming elections. “We are at the door of the State House. There’s just a door wedge standing in our way.”

And with no sense of how ridiculous he sounded, Mr Ramkalawan added: “I am pleased to announce that it is the SNP that will give Seychelles its next President”.

The SNP is cynical about its new opposition brothers.

Mr Ramkalawan talked about the newly formed Lalyans Seselwa which was created by disenchanted PL members. He said: “All this time, at the SNP, we have said that there is corruption in government but there is nothing better than people who were themselves in power coming out and corroborating what we said”. But it was important that the party “keep an open mind”.

He also likened Lalyans Seselwa to an owl which eats rodents. “As long as they eat the rats, it’s good. So long as they do not come close to our henhouse!”

Come on Wavel, that's not nice. There is really no need for that kind of spite. It's time to bridge the divisions not make them worse.

Regrettably, the other opposition parties seem no better at organisation. The Seychelles United Party (SUP), the People’s Democratic Movement (PDM),  the Seychelles Party for Social Justice and Democracy (SPSJD) and the Independent Conservative Union of Seychelles (ICUS), have all indicated their intention to participate in the forthcoming presidential and National Assembly elections, but as yet they have not yet nominated their candidates. 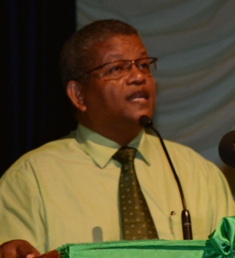 Expectation: Wavel Ramkalawan says the next President will be from the SNP

So far, only one independent candidate, Philippe Boulle, has confirmed his participation in the next presidential election.

What is wrong with these people? Surely they realise that the only way forward for political change is for all the opposition parties to get together and form a United Front.

I want to see a balanced National Assembly where the voice of the people can truly be heard. The SNP boycotted the last election in protest at the government's failure to revise electoral laws on campaign expenditure/Electoral Reforms. Very high-minded, but where did that leave the voters? Voiceless, that's where. It was a political stance that proved not in the interest of the Seychelles people. And was that the real reason, or was the SNP so disorganised it could not get its act together?

I strongly believe all the opposition parties should now arrange a formal convention so they can decide how to tackle the next Presidential and National Assembly elections. It is 38 years since SPPF and Parti Lepep took up power and it's time for change.

Today let's put our people first and get together for the benefit of our beloved Seychelles. I will use SNP’s slogan “The Time is Now”.

I think the time now is a perfect moment for all the political parties to join together for the betterment of the country. “Unity is Strength”. So, come on. You can do this.